This is MK III of the frame (MK II collapsed in the shrinking).  This version wasn’t without it’s problems but it turned out alright in the end .. I am thinking about some modifications / new designs. 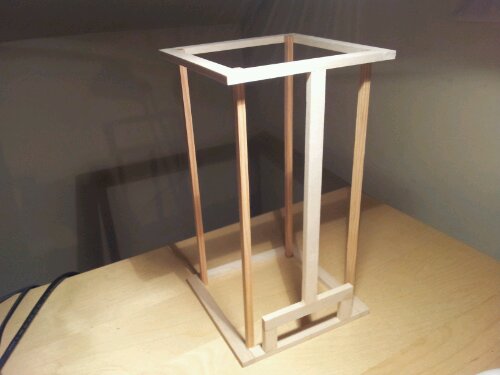 The basic structure of my ‘mood light’, colour light, whatever light, is finished and now I just need to secure the electronics and decide what other features I might add.  It’s made using a wooden frame that is then covered in a heat shrink film using in RC aeroplanes.  The result is a glossy finish that is shrunk to fit and allows light to show through.

Some ideas of have for evolving the design:
– Various lighting modes (candle flicker, rainbow, random, etc)
– Microphone level / IR detection to change speed of the colour change
– BlueTooth compatibility so you can change the colour, etc remotely
– Time of day feature (changes colour and intensity depending on the time of the day
– Lucid dreaming mode – in the middle of the night, start pulsing the colours so I may realise the flashes in my sleep and start lucid dreaming..
– Something else (don’t know what yet!) 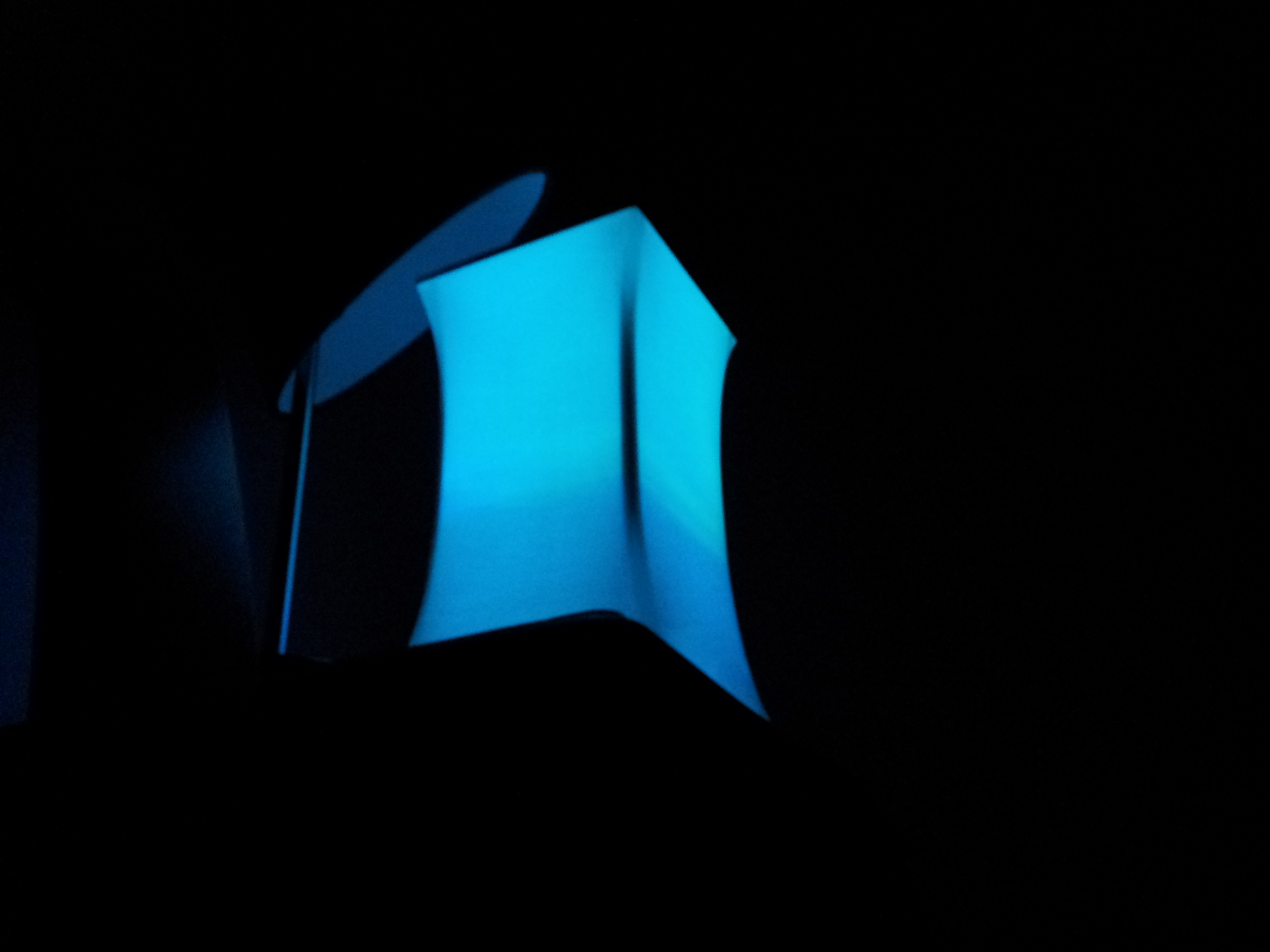 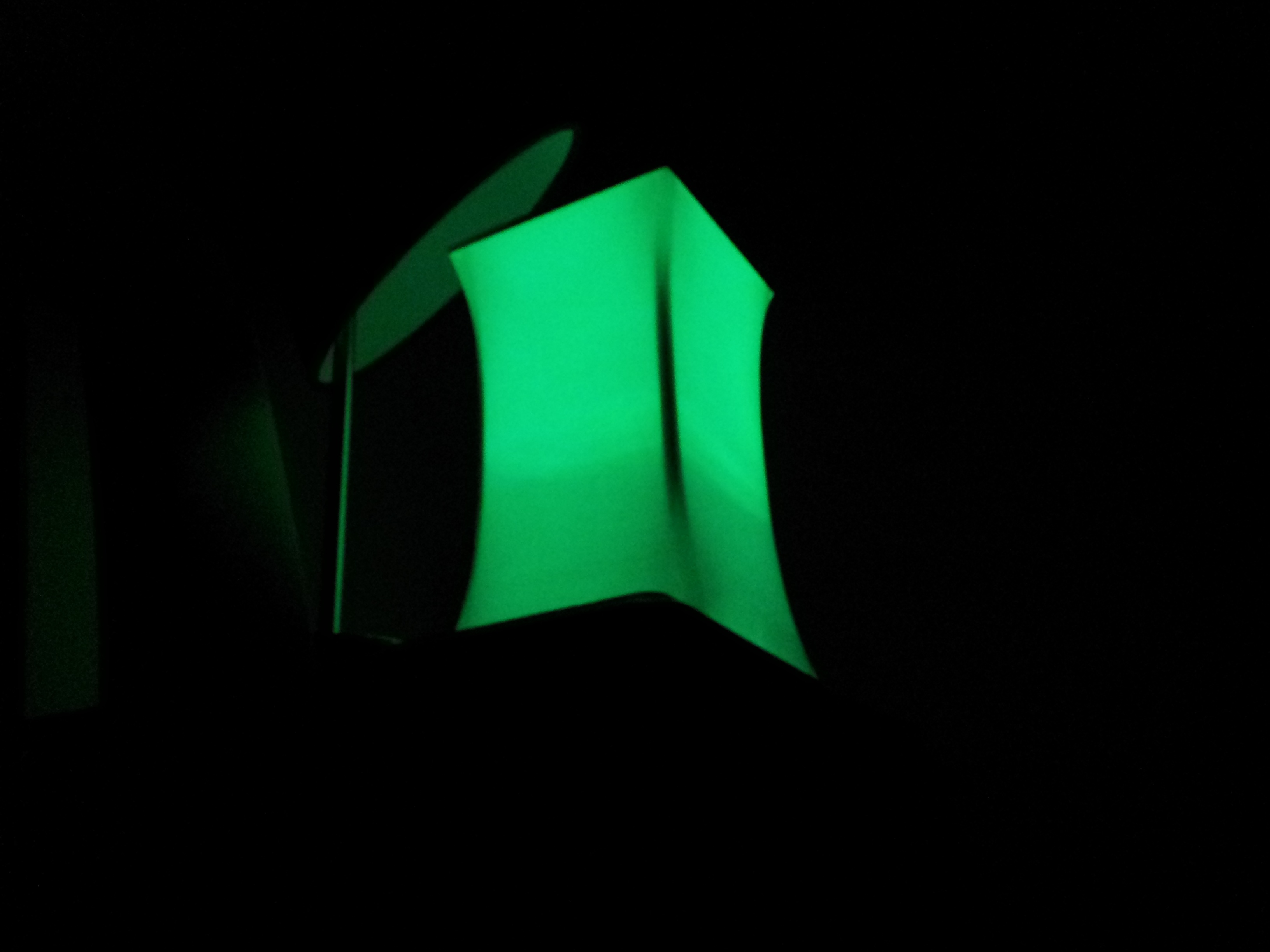 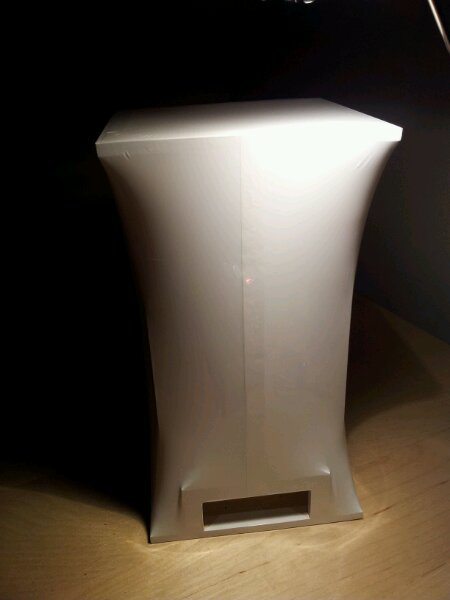 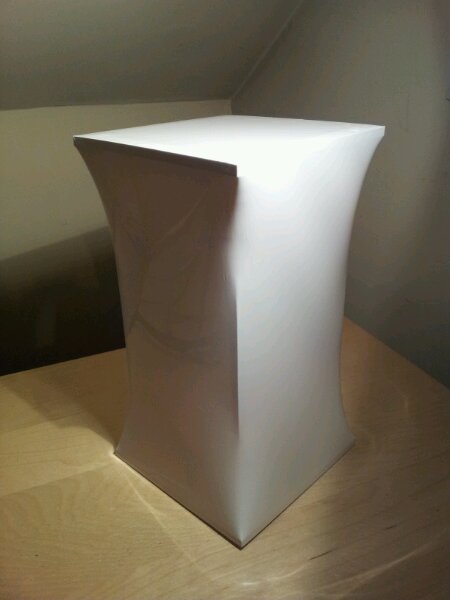 It’s February .. wow, these last few weeks, and also this year so far, has seemingly passed in the blink of an eye! I’ve been working on a few things lately, my laser projector type thing but also, a “mood light” (a light that changes colour).

Mark I – turned out OK, a few learning curves climbed and some accidental successes.
Mark II – not so good… started off so well too
Mark III – still in planning.

I have a final idea for the light and I will post some details soon.

My first robot. I call it…

Held together with sticky tape, this little robot will only follow preprogrammed paths but it’s early days.

it’s official, I am a geek! 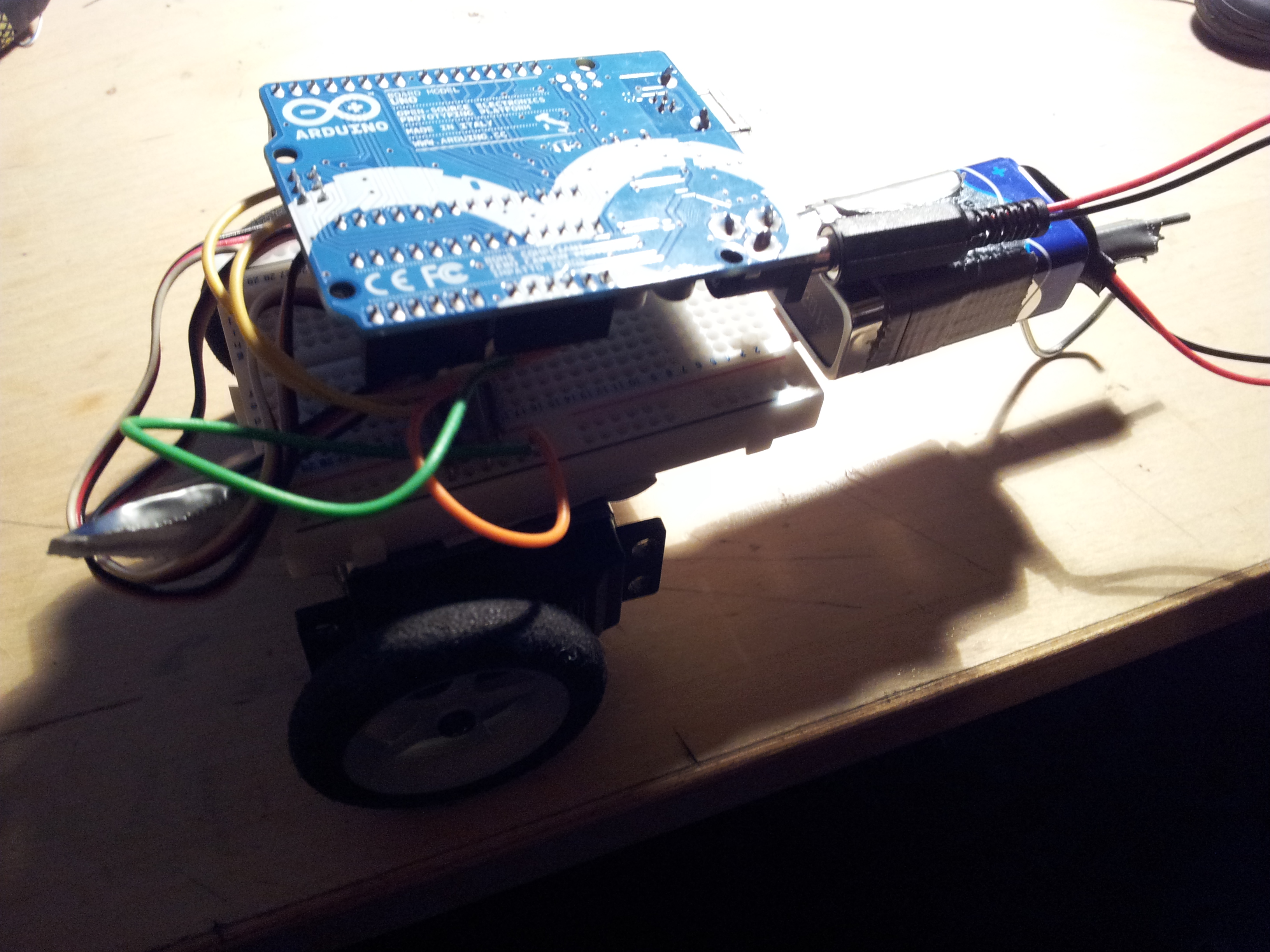 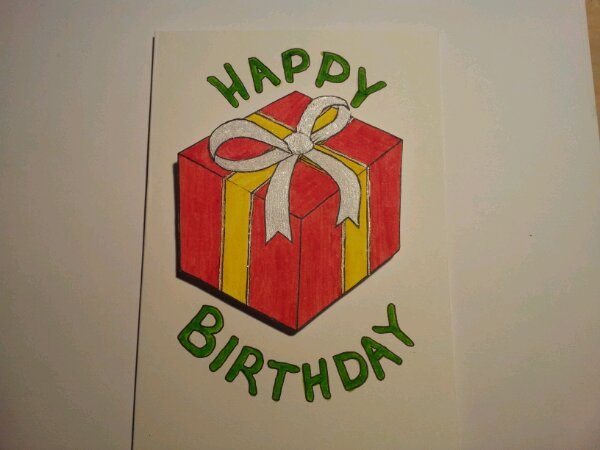 And to show the 3D a little more… 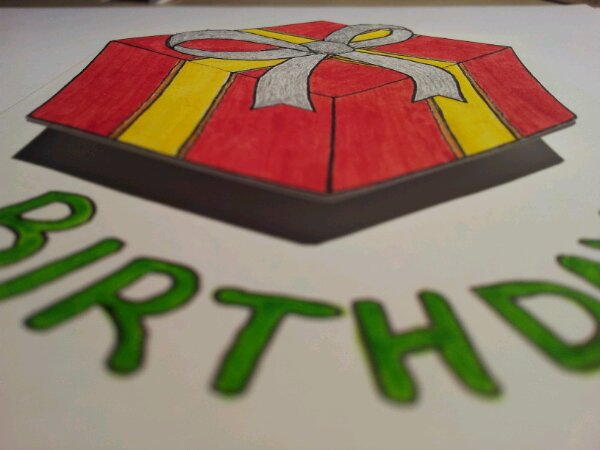 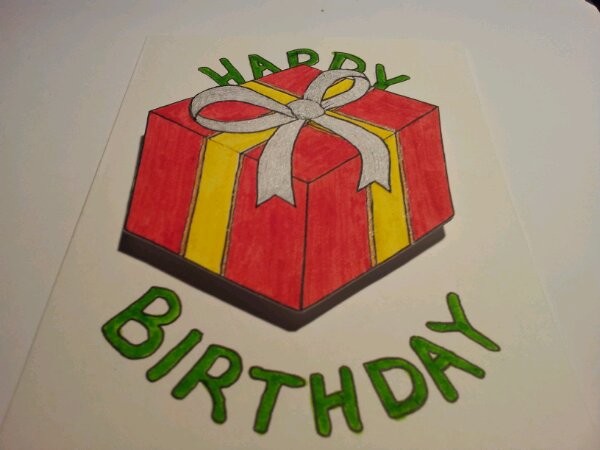 The footage was shot in Scotland, on the coast of Moray on New Years Eve 2011.  I didn’t use a tripod so the video is a bit wobbly when I zoom in to 56x but it does highlight the capabilities well, seeing all the way across the mini bay 🙂

The first fields I came to… 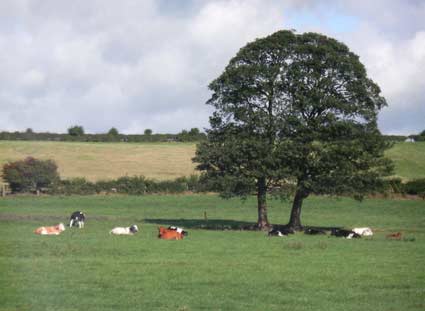 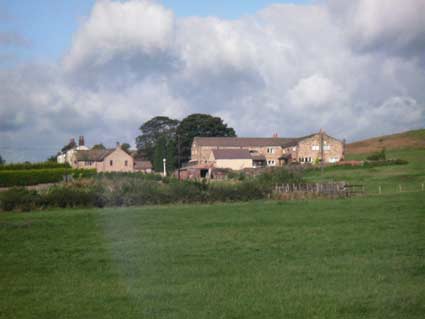 Further down the road and off to one side we have Heckmondwike… here’s a building. 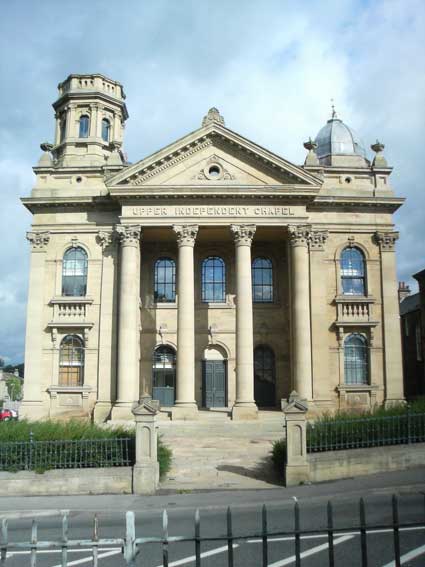 Towards Batley, we come across Staincliffe Church (which is near to a good mate)… 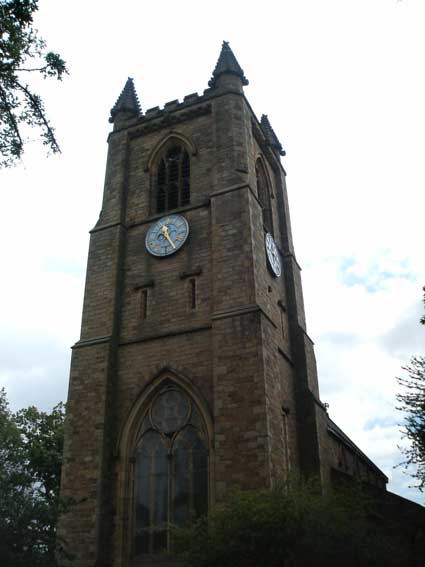 Pausing to notice the red leaves on the pavement. A sign of Autumn… (in Summer) 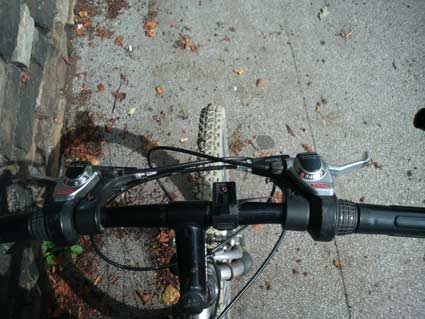 My local park… has Fairies! 😀 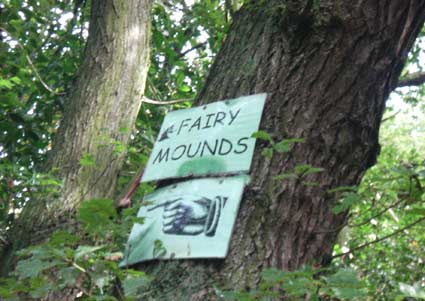 and I can see why they’d live there… 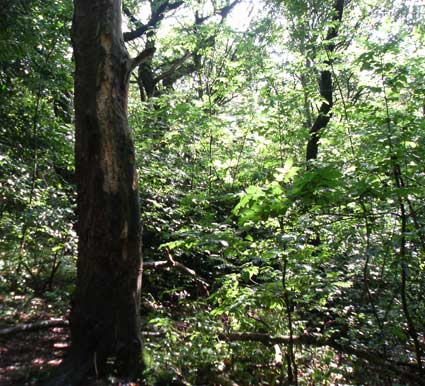 BananaArt(tm). I have a habit of writing on Banana’s natural packaging – whatever comes to mind at any given time. I haven’t done it for a while, and I should start again – what a perfect canvas for Art?

Here’s one I prepared sometime ago… based on Massive Attack’s – Protection. 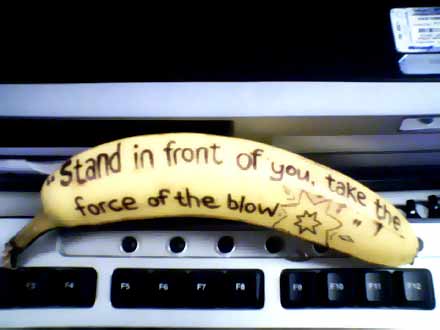 A while ago I was playing a meditation mp3 over some music to see how well it would fit and by accident, I found a good quote to fit over a progressive track I like. The track is Greppi’s World – Una Questione Informatica with the narrative by Alan Watts – Teaches Meditation. The result = informatica.mp3 (right click Save Target As…)

I typed up the narrative as best I could and credit goes to Alan Watts for speech, the whole thing is well worth a listen. Here’s the text:

We have a common saying talking to yourself is the first sign of madness, now obviously, if I talk all the time – I don’t hear what anyone else has to say. And so in exactly the same way if I think all the time, that is to say if I talk to myself all the time, I don’t have anything to think about except thoughts and therefore I am living entirely in the world of symbols and am never in relationship with reality. Alright, now thats the first basic reason for meditation but there is another sense and this is going to be a bit little more difficult to understand why we could say that meditation doesn’t have a reason or doesn’t have a purpose and in this respect its unlike almost all other things that we do except perhaps making music and dancing because when we make music we don’t do it in order to reach a certain point such as the end of the composition, if that were the purpose of music, to get to end of the piece then obviously the fastest players would be the best and so likewise when we are dancing. we are not aiming to arrive at a particular place on the floor as we would be if were taking a journey. When we dance, the journey itself is the point, when we play music the playing itself is the point, exactly the same thing is true in meditation. Meditation is the discovery that the point of life is always arrived at in the immediate moment, and therefore if you meditate for an ulteria movtive, that is to say, to improve your mind, to improve your character, to be more efficient in life, you’ve got your eye on the future and you are not meditating – because, the future, is a concept, it doesn’t exist – as the proverb says, tomorrow never comes. There is no such thing as tomorrow, there never will be – because time is always now and thats one of the things we discover when we stop talking to ourselves, stop thinking, we find there is only a present, only an eternal now. So, it’s funny then isn’t it? That one meditates for no reason at all except we could say for the enjoyment of it and here I would interpose, the essential principle [is] that meditation is supposed to be fun. It’s not something we do as a grim duty, the trouble with religion as we know it is that it is so mixed up with grim duties, we do it because it’s “good for you”, a kind of self punishment. Well meditation when correctly done, has nothing to do with all that, it’s a kind of “diggin’ the present”, it’s a kind of “groovin’ with the eternal now, and brings us into a state of peace where we can understand that the point of life, the place where it’s at is simply here and now…

I’ve put some of my tunes that I’ve made up, there’ll be photos and more coming in time .. 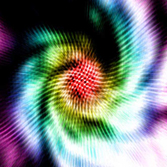